Panel discussions, hosted by ASU and Washington Business Journal, outlined the importance of $52B CHIPS and Science Act

America’s share of global semiconductor production has fallen from 37% in 1990 to just 12% today. During the same period, semiconductor use has risen to define almost every aspect of life.

“To use your phone, to use your computer, to turn your car on, you need microchips. And right now, we are heavily dependent on foreign nations for them,” said US Sen. Kyrsten Sinema, adding that such dependence represents economic and security risks to the country.

Sinema was speaking at “CHIPS for America: Winning the Race to Make the Best Microchips in the World,” an event hosted by Arizona State University and the Washington Business Journal on Sept. 22 at the ASU Barrett and O’Connor Washington Center in Washington , DC

ASU President Michael Crow moderated the first panel on workforce development with Sinema and US Sen. John Cornyn. After referring the importance of advanced semiconductor technology to tackle social challenges such as health care and climate change, Crow asked the senators how we can expand public engagement with initiatives like CHIPS.

“We are just at the beginning stages of what we need from a research perspective and from a manufacturing perspective,” Crow said. “So how can we get people to understand the need for ongoing investments in science and technology?”

Sinema responded that most people don’t think about the challenges of the semiconductor manufacturing industry.

Attendees listen to the first panel during the “CHIPS for America” ​​event at the Barrett and O’Connor Washington Center in Washington, DC, on Sept. 22. Photo by Samantha Chow/Arizona State University

Crow agreed that developing human capital is crucial to success. He shared that ASU has expanded its engineering enrollment from 6,000 to 30,000 students, comprising the largest university engineering program in America. But even more talent is required and demand continues to grow.

Bash asked Andrews to offer a perspective on the importance of the CHIPS and Science Act, and Andrews described it as likely the most important competitiveness legislation passed by the US since World War II.

“We have all lived in a world of globalization and seeking the lowest cost market,” he said. “But we are moving from a world of ‘just in time’ to a world ‘just in case’ because we’ve realized we can’t rely on being over-consolidated in one region. We need to have diversity and resilience. We just can’t be successful without it.”

Bash, who served as chief of staff to the US Secretary of Defense during the Obama administration, asked Kelly why he believes the CHIPS and Science Act is important from a security perspective. Kelly then pointed to a consequence of the market consolidation that Andrews highlighted: the advanced semiconductors at the heart of American military aircraft, submarines and satellites come from South Korea and Taiwan.

“Having a supply line that goes across the Pacific Ocean to get critical microelectronics components for our defense hardware is not good for anybody’s national security,” Kelly said. “Well, certainly not ours nor our allies. So we need that capability here.” 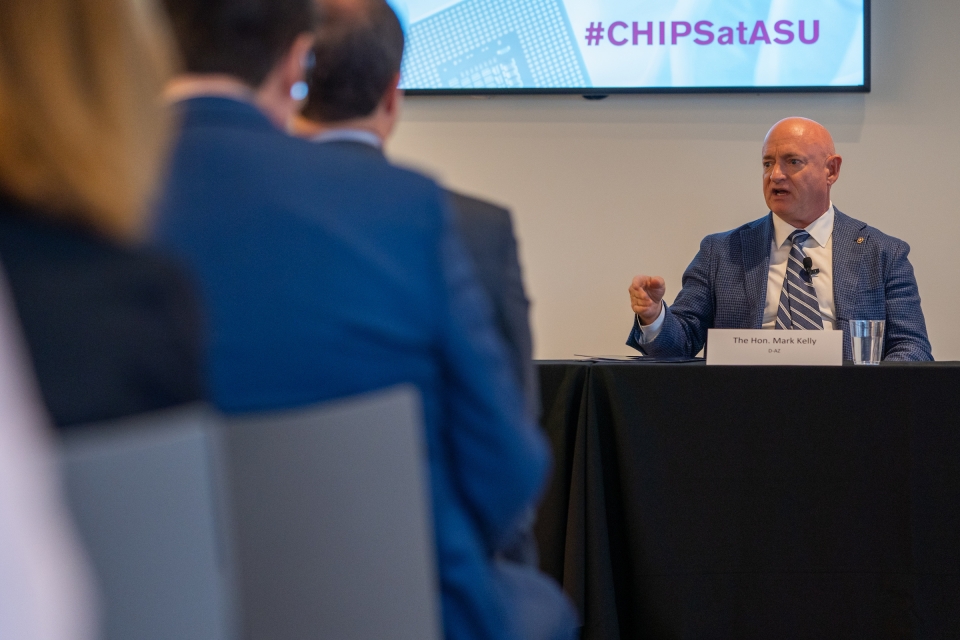 US Sen. Mark Kelly speaks during the “CHIPS for America” ​​event on Sept. 22 in Washington, DC Photo by Samantha Chow/Arizona State University

Bash asked Kelly how Arizona is helping to improve domestic capability alongside the expansion of ASU’s engineering program. Kelly noted that Intel, the country’s largest chipmaker, has had a big presence in the state for decades, and is now devoting $20 billion to open two new “fabs,” or factories, at its Chandler campus. Simultaneously, global chip giant Taiwan Semiconductor Manufacturing Co. is investing $12 billion to open its first North American factory in Phoenix.

The US Commerce Department is expected to dispense CHIPS and Science Act funds next year as manufacturing incentives, resources for research and development, and support for workforce development. Kelly said it will take a little time to see the impact, but he believes this effort will help catapult the country forward to global leadership of the semiconductor and microelectronics industries.

Top photo: From left to right: ASU President Michael Crow, US Sen. Kyrsten Sinema and US Sen. John Cornyn participates in the first panel discussion during the “CHIPS for America” ​​event at the Barrett and O’Connor Washington Center in Washington, DC, on Sept. 22. Photo by Samantha Chow/Arizona State University